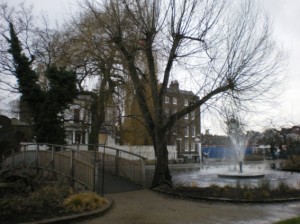 Do not trust maps, in London, they don’t tell the truth: what you think is nearby on the map, will always be elsewhere in the reality. Walking is something I do really enjoy. Covering neverending distances is something I enjoy less, but still is a wonderful way to get to know a place. When I don’t walk, I observe this town from above: from the upper floor of the buses, from the windows ot the overground train crossing the houses at their somthing like second floor of the houses. And I grasp instants of people lives: a white man gardening the backyard of his place, a woman caring at her kids inside a sad grey block, a couple of gothics walking to reach Camden Lock. I take the chance of any interview and any step I do in my job search (yes, now I’m searching for a job – it seems there’s always something to search for here in London, doesn’t it?) to discover new areas of the town, but at the moment I mostly had the chance to explore – if you look at a standard map of London and use the Thames to split the north and the south of the town, and the City as ‘hardcore’ of all the issue – some east, some north-east, some north-centre and some south-east of the Thames.

I had to meet Chris, a few days ago, at the 56a Infoshop Social Centre. You can reach that place taking a couple of buses from Clapton Pond (where I live) to Walworth and, as I never give up any chance to play, I did it also this time. This means that, without any ‘academic’ intention about questioning issues such as place, standard maps, distances and cultural assumptions about the boroughs I was going through, I jumped on a bus, reached the upper floor and began shooting pics as a common tourist. I wasn’t really interested in anything in particular. I just took a pic any time I had a question or some stupid reflections were coming up to my mind. Clapton Pond seems like a fairytale, notwithstanding its poverty. A fountain, a small wood bridge, a few trees, and probably ducks (not in this season). In front of it, waiting for the bus, you are offered the sight of some anonymous shops and a phone box sunk in the cement of the pavement (it’s a pretty traumatic experience calling from there, as the pavement itself is partially lift so that you are forced to assume a diagonal position with your body as well, and hope not to fall out of your centre of gravity).
From the bus I take a few pics, perfectly knowing the areas of the town I’m in – and being able to figure them both in my mental map of London and in the memory I have of the standard map of it, but still… where are the borders among the different boroughs? And how comes that sometimes boroughs are not written in some maps, but smaller areas within them are? Which is the reason why a map includes the name of a smaller area and skips out the one of a bigger borough?

The freedom of enjoying this small trip gives me the chance to notice and joke about the places, so that I feel moved as I see a huge building in cement, glass and steel with two high wings… and something that seems just fallen down between them. I can imagine it desperately crying to the people walking quickly in the streets nearby, and I can hear its voice and story: “Hey, you, can you help? I’m a piece of the roof, I fell between the two wings of this building and it’s so narrowed that I can’t stand up anymore so to climb it and get back to my place… CAN SOMEONE HEEELP?!?!?!?!”.

Chris (Captain Mapp) draws maps, and makes people do the same. Then he collects the works produced and organises exhibitions of them. I ask him what’s next, when he leads a workshop or a walk with people, and they produce their maps of a place, or tell him their stories/memories about a neighbourhood in the past. “What’s next? Nothing!” – he replies. All is spent in the dimension of the actualising, in a full situationist style.

I got to know him whilst searching online for maps and mapping in London, and I met the project “THE MAP ROOM (is open…)” – that exists also in reality as “suitcase” archives of maps, projects, festivals he produced (or led the production of)… The maps we are talking about are not the usual ones, with standard points of reference anybody could use to orientate in the space: they are subjective, emotional, symbolic, and mostly depict their author, his/her memories, points of view and desires. They reflect the sense of a place by those who live it, and for this reason both a (psycogeographer) artist and an anthropologist can be interested in them. I’m starting wondering how an ethnographic project I have in my mind about the issue of “personal and collective identity” could match with his work and be developed by our different, but closed, gazes. One of these days, I will find out the time to write a draft about it, and ask Chris to give me his feedbacks and work on it himself too.