An Anthropologist in London, arte, comunità

Fortuitous Encounters (I’m Doing Art!, My Extended Family, and the Perception of Self Within a Place) 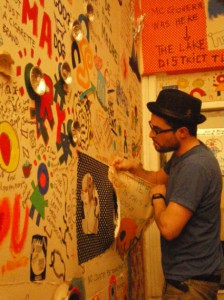 “Don’t try, do!”. This sentence resounds in my ears as a mantra since when I’m here. Unfortunately, I wasn’t able to do much up now, but I’m slowly beginning. A guy physically stopped me one evening on my way home, whilst I was still in a temporary flat I rent for one week in Shoreditch. “Come inside and visit my exhibition!” – he said, and I did. It was the opening, with lots of people crowded in the small space of a former shop, now used as an art gallery. His exhibition was actually one single huge work on canvas that covered the four walls of the shop, painted and written with some hints he gave (colours, “symbols”, sentences) and for the rest by those passing by in the street the days before, and curiously asking what was going on, as well as by the ones joining the opening itself.
I read a few words and realised I was interested, but felt like I wanted to visit it another time, without so many people around. “I come back tomorrow”; “I’ll wait for you”. The day after we both kept our word and I came back, to realise that Piero (Arico’ is the surname) is an Italian artist and a lovely guy – generous, passionate and full of fascinating contradictions. A deep rich soul I immediately clicked with and – enjoying his and his mates’ company (he was supported in this work by the crew of ArtFeelers) – joined the following days for a couple of films in the evening and a lovely shared dinner with some more people. So, one evening I felt sad and tired because of the tough flat-hunting turned out to be one of the most intense and enriching event I could live. I wrote on the canvas – and this became part of his work – “From now -> on you belong to my extended family”, and this sentence joined the many contributions other people gave – in the direction of a sort of collective meditation about society, relationships and communication in contemporary world Piero suggested and that is his aim (“but we can only suggest a direction, and then who knows what people will develop from a hint?”).
Anyway, I met a few new ‘brothers’ and ‘sisters’ by meeting him – and it’s a crew I quite enjoy. Relaxed, deeply in contemporary arts and in sharing food and talks. In spite of those who say London is the capital of loneliness! Still, somehow, I have to say this is true. It’s quite easy to relate each other quickly, but the flow of the people who come and go is astonishing. As soon as you tie up with someone, you risk that this person goes away (usually abroad – ‘somewhere else’) to follow his/her attitudes, dreams, life. Some people are never fed up by the town, whilst some others ‘bite it and rush away’. London is immense and with many ‘centres’ that still – luckily for me and by my point of view – are build up from former villages and/or act as real neighbourhood. My friends (who are not going far at the moment, or at least have short trips “in the continent”) are all around here. I’m in a multicultural cool place far from the touristic area, with no mess around and a walking distance by the former ‘village’ of Stoke Newington. I only miss the sea, but can reach the Thames – and imagine the river docks as scratches of an imaginary sea – in half an hour by bus. And whilst talking with new people I meet, I define myself in terms of East Ender, living in Clapton (Hackney), and realise – by this same way I talk about me, as “new Londoner” – the way some pieces of my identity are to a certain extent “shifting”- carrying me at least to a new (temporary) definition of myself. It’s a curious process – and something anthropologists love to live on their own skin and self-reflect about!

See more pics I took of the exhibition here: Too Much Rum in a Cup of Tea